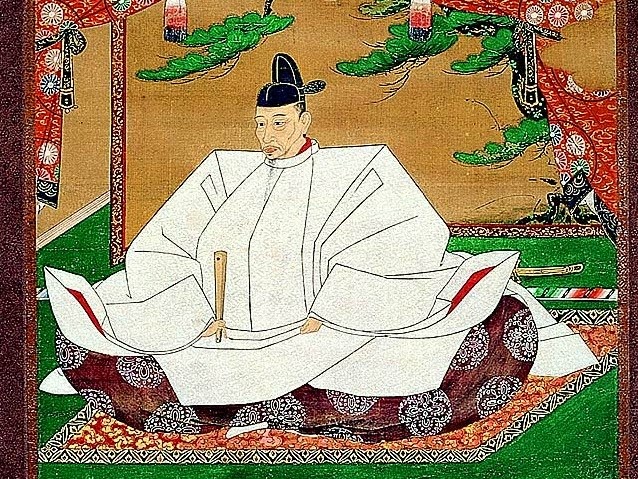 Toyotomi Hideyoshi began life as a peasant, a foot soldier in Nobunaga’s army, and rose to become a commander of samurai. His skill, fierceness, and cunning helped him advance as a military officer. He is an individual who showed incredible ability to fight and to organize troops, and he rose rather rapidly within the command of Oda Nobunaga. Eventually, he became the ruler of all Japan. He was a fearsome sight; a warrior who led his men into battle. Unlike the other two great unifiers of Japan, Hideyoshi led from the front.

After the assassination of his master, Oda Nobunaga, Hideyoshi avenged Nobunaga's death by killing his assailant, Akechi Mitsuhide. He had the murderous head put on public display; a crude form of press release, clearly a warning that Hideyoshi was taking over where Nobunaga had left off, but Hideyoshi found Japan still torn apart by restless warlords and quickly set out to further the cause of reunification.

Hideyoshi was as crafty as he was ruthless, and he soon implemented a plan to rid the islands of undesirable weaponry and any challengers to his authority. In 1587 he issued an edict that all non-samurai were to turn in their swords. The soldiers fanned out across Japan in what became known as the great sword hunt. He had decided that the peasantry, the population at large, did not need to be armed. His motivation for this was to feel more secure, with fewer people who could possibly rise up and overthrow him.

He knew that his enemies would be outraged, so his sword collectors simply explained that the swords were to be melted down and transformed into a huge statue of Buddha. But even with the thousands of weapons melted into the prodigious belly and smiling eyes of the great Buddha, Hideyoshi’s work was not complete. One proud clan still refused to buckle under the shogun’s rule.

These were the mighty Hojo who ruled the east of Japan from their fortress of Odawara. Toyotomi Hideyoshi laid siege to Odawara castle with an army of nearly a quarter of a million men. The Hojo were hopelessly outnumbered, but tried to resist. Hideyoshi deployed his army on all sides of the fortress. Sizing up his enemies defenses, he decided the best course was to starve the Hojo out.

In a letter to his mother written in 1590, Hideyoshi described his strategy and the importance of this battle “Please do not worry about me. Now that I have Odawara tightly besieged, I control 80% of what goes on in the provinces. Since Odawara is the key to the entire nation, I have to starve them out, so it will take time.”

The siege wore on. Hideyoshi was patient. The samurai grew vegetables and played games while the shogun waited. After three months, the Hojo realized they could hold out no longer. Facing a shortage of food and supplies, they surrendered.

Toyotomi Hideyoshi was supreme shogun. He had unified Japan in a way that no one had for centuries. The last obstacle to reunification had fallen. For the first time since the rule of Yoshimitsu in the 1300’s, Japan bowed to the will of one man, shogun Hideyoshi.

One of the first things Hideyoshi begins to do, when he finds himself having achieved power, is to shut the door behind him and make sure that no one else can ever do what he did. Hideyoshi, the peasant who became shogun, decided that all samurai must now come from samurai families. No one would be able to rise from a lowly birth to the pinnacle of power.

Hideyoshi now turned his attention abroad. In 1592, he launched an invasion of Korea, with a force of over 100,000 men. They made rapid progress, fighting their way up through the Korea peninsula to Seoul and beyond. However, sickness, the winter frosts, together with constant guerilla attacks, gradually undermined the Japanese military position. Hideyoshi’s regime was weakened as a result of the failed Korean expedition.

Hideyoshi who had fought his way into the samurai class and made its rule supreme, now faced the same problems as his predecessor, Oda Nobunaga. To be successful in founding a lasting power structure in Japan, he needed an appropriate heir to which he can pass his position on to.

As Hideyoshi laid dying in 1598, he announced that his infant son, Hideyori, would succeed him. Several times before he was to pass away, Hideyoshi called to his five major generals, having them swear that they would support Hideyori upon Hideyoshi’s death. The fact that he had to call them together more than once suggested that he was somewhat apprehensive to the future of his young son, and for good reason.

One general in particular, Tokugawa Ieyasu, a trusted confidant, pledged his loyalty. It was a promise he would not keep. Within hours of Hideyoshi’s death, this warrior would begin his own bloody struggle to earn the title of shogun.