The Story of Minamoto Yoritomo

The Story of Minamoto Yoritomo 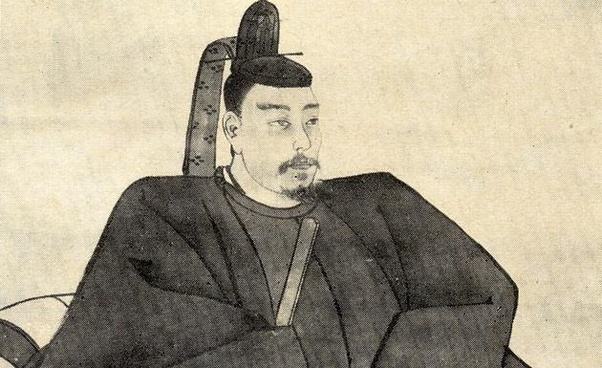 In virtually every chapter in Japanese medieval history, there was war and conflict, and at the center of the conflict was the daimyo, the local warlord. It was he who chose the fights, and he who led armies of men who drenched Japan in centuries of blood. Japan was ruled by an emperor, and the warlords served the royal court. That is until one day in the year 1192, when the nation paused, and set off in a new direction.

That was the day a warlord, Minamoto Yoritomo, declared himself shogun. While all of Japan bowed their heads to the emperor, it was the shogun whose will ruled. The shogun was the military dictator of Japan. The word is actually a shortened version of the full title, Sei-I Taishōgun, which literally means ‘Commander-in-Chief of the Expeditionary Force Against the Barbarians’, the barbarians being the enemies of the shogun.

In the middle ages, Japan was a group of islands with no central government. Instead, hundreds of local warlords carved their own small territories out of the misty hills and valleys. Warlords and their samurai fought among themselves, year after year, decade after decade, for control of the scarce farmland. Eventually, two power blocks developed; the Taira clan in the west, and the Minamoto in the east.

Soon, as the years went by, these two families would come into conflict with each other and threaten the very existence of the imperial system they were rewarded for supporting. These two clans eventually met on the battlefield. It turned the countryside red with blood. One man, Minamoto Yoritomo, would emerge from this conflict to change the face of Japanese politics.

Yoritomo was the heir to a prominent warrior tradition, and his revolution was to inspire the samurai of Japan to sense their true power. He simply said to his fellow warriors in the east; come fight for me, join my army, and in return, I will do for you what the court has been doing for you in terms of guaranteeing your status. But I’m a warrior like you are; I’m not one of them. He obviously hit a nerve here, the timing was very good.

Yoritomo led his Minamoto clan in a struggle with their rivals of the 12th century, the Tairas. His armies were soon caught up in the great battles that became known as the Genpei Wars. And it was during the great war between these two powerful clans, that Minamoto Yoritomo saw his chance to dominate all of Japan’s warlords. 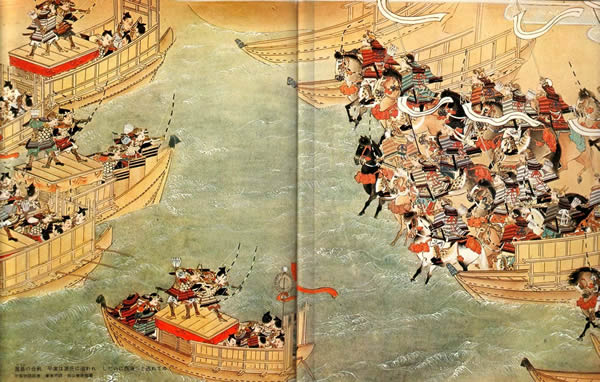 The Genpei wars came to a dramatic culmination in the battle of Dan-no-ura in 1185. Dan-no-ura is almost unique in samurai history because it was a sea battle. It was fought in the narrow straits of Shimonoseki in western Japan. The ships were fighting platforms, flat tops with rowers on a lower deck, and archers fired away from the top decks. As the ships drew closer together, swordsman engaged in hand to hand combat. Metal struck bone in a final struggle for domination. The battle raged on.

The boats had to maneuver in the rough tides of the narrow waterway. In a brilliant tactic, the Minamoto generals commanded their archers to concentrate on the rowers and steerers of the Taira ships, leaving the enemy vessels spinning helplessly in the current.

The emperor of Japan, a child named Antoku, and his grandmother were passengers on one of their ships. Onboard the Taira ships, it soon became clear that defeat was eminent. Soon, Minamoto samurai would board their ships and put them all to the sword. Tomomori, head of the Tairas, made an announcement. Suicide was now the only answer. Then he tied an anchor to his feet and threw himself into the sea.

Meanwhile, the grandmother of the eight year old Antoku, took the young emperor in her arms and walked slowly to the ship’s edge. She prayed with the child to Buddha, and their imperial ancestors, in preparation for the final act. Then with the words “In the depths of the ocean, we have a capital city” she jumped into the waves, taking the young prince with her. The remaining Taira warriors followed her lead by committing Seppuku, cutting themselves open with their own swords and throwing themselves into the sea.

It was said that the blood from the numerous slain warriors of the Taira, mingled with the red dye from the Taira flags, made the sea turn red in the area of Dan-no-ura.

Yoritomo then emerged from the Genpei war as the officially recognized head of warrior society in Japan, the official head of the military, and police systems for the court. Yoritomo’s government was called bakufu, named after the tents that the generals set up near the battlefield.

The great skill that Minamoto Yoritomo possessed was the skill of political adroitness, so that he could convert his military victories over the Taira into something more long-lasting. As a result, he set up a system of constables around the country, where by these local samurai governors acted on his behalf rather than being ruled by the imperial court. 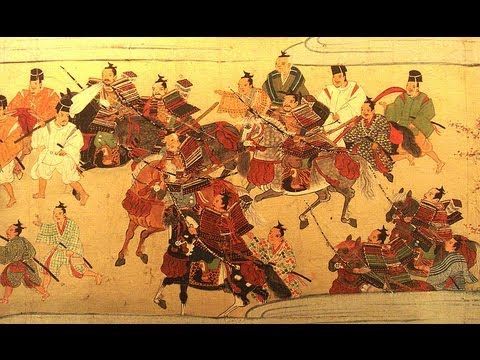 With this bakufu rule, Yoritomo managed to do more for Japan than the emperor’s before him had ever achieved. Aside from bringing the warring daimyo’s under his control, he created the first warrior government the Japanese people had ever known. In the process, he brought order to Japan, establishing a justice system fairer than anything that preceded it. Warriors took over tasks that the former bureaucrats of the imperial palace had been doing badly, or corruptly. His loyal constables monitored everything from taxation to agriculture, to military recruitment.

We generally see Yoritomo as the first important military figure to initiate a long period of samurai involvement, if not outright control, of the political process in Japan. The first shogun ruled with an iron fist, but knew how to be even handled.

When Yoritomo died in 1199, the tradition of the super warlord was established, but every shogun that followed knew what Yoritomo knew, the shogun would only survive if he was the wiliest fox in a forest of ambitious and dangerous warlords.